Hello Heart Warriors! My name is Joan, and I am a chef at a local Wegmans Store in the Buffalo, NY area. (Wegmans was just voted #2 on the Companies to work for Forbes list!).

I earned my Zipper almost 4 years ago when I was 49 years old. I really did not have many symptoms, only being tired and sleeping about 10 hours a night and I had been seeing my regular doctor twice a year. My mother, father, and other family members also saw the same doctor. My mother had been complaining for almost a year to this doctor that she was having a hard time breathing and didn’t feel well. He sort of ignored her symptoms, but in November of that year she was diagnosed with heart failure. She had some damage to part of her heart and was hospitalized. When I talked to her I decided I would cancel my upcoming routine appointment for December and find a new doctor. Now thinking back to when my mother was in the hospital for the heart failure, I realize that my valve was actually in as bad of shape and I didn’t even know it.

I found a new doctor and scheduled a routine visit for January of 2014. I was going over my history with her and when she listened to my heart she heard a murmur. I told her I knew I had a bicuspid Aortic Valve just like my mother. The new doctor asked if I ever had a echocardiogram. I had never had an echocardiogram before, but I had had EKGs which always came back as normal. The next day as I went and had one done, I wasn’t thinking anything of it.  I was surprised when I received a call from the doctors office the next week telling me I needed to see a cardiologist. The new cardiologist diagnosed me with severe Aortic stenosis. I am very fortunate to have a sister who is a Registered Nurse, as she explained a lot to me and also assured me it is fixable and helped me understand what needed to be done.

When I met with the cardiologist he ordered an angiogram first to see how calcified the valve was, which was done in February of 2014. I had a well known doctor do it, and I was awake during the procedure. He checked all my arteries in my heart first and said they all looked good and clear. Then when he checked the Aortic Valve, he was having trouble getting any size catheter through the valve, which meant there was hardly any blood flow through it. When he kept asking for different sizes from the assistants I knew it was bad. He tried for more than 45 minutes then decided that was enough, my surgery would be sooner than later. That explained why I was sleeping so much. The surgery was scheduled for the following month, March 27, 2014.

Between the time I was diagnosed and when I had my angiogram the best thing for me was to get as much information about the surgery as I could, it does help you stay calm. The way you need to look at it is  that this is something that can be fixed. The surgeon I will have does this everyday it’s not like it a dentist or a car mechanic. The best care will be given and I am young so recovery will be easier. I felt fine, I had a perfect EKG so my heart rate was always steady. I was nervous, but I was at a great hospital. Gates Vascular Institute in Buffalo NY was where I was. Its like a spaceship, everything is new there.

My surgery was amazing, The hospital I went to is in the top 2% of heart hospitals in the US. The surgeon does the valve replacement surgeries twice a day, and he prefers doing a mini incision about 3 inches wide horizontally above your right breast. Recovery time is much easier. For me it wasn’t too bad because I was so young. When I had my pre-testing done it was extensive so the doctor can see beforehand what way he can perform the valve replacement. The small incision is him going between your ribs to get to the valve, then you are put on a bypass machine while the valve is being replaced and your heart restarted, and then a titanium plate connects your ribs back to your chest bone. Pretty amazing when you know all about it. 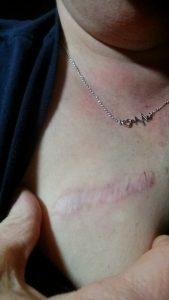 While in the hospital, you constantly have a monitor on so they can watch your heart rate for atrial fibrillation (afib). It was after 3 weeks of being home that my heart rate went up to 153, and I knew something was wrong as any heart rate over 100 is a concern so I went to the emergency room at Gates Vascular. When I got admitted they lowered my heart rate with medication. This happened to me two more times two weeks later, and thankfully there was a doctor there that explained to me what was happening. He explained that I had Sinus Rhythm, which is when you heart is worked on there can be an area that was touched and its rhythm got off track. They decided to do a procedure where they put a catheter in through my groin up to my heart and find that spot where the rhythm is off track, and work to get it back to normal.

I choose an organic valve since I’m a chef I didn’t want to take blood thinners. I know this valve will last around 20 – 25 years and when its time I’m sure TAVR will be very common. We all know that the medical field advances very fast, in 20 years or so there will be more options to replace valves. This is already being done here in Buffalo. TAVR is short for Transcatheter Aortic Valve Replacement. It is done now for people who would not be able to go through a traditional open heart procedure because of age or other medical issues.  I was home from work 12 weeks, I went back to work full time, standing all day and was fine. This past year I really started getting in shape. I have lost 49 pounds, I eat very healthy because I know what to cook of course. I don’t take much medicine either. I am proud to tell anyone that I have had my valve replaced and I cherish every day.