The Importance of Listening to Your Body

Today’s Zipper story comes from Rosanne, a very well written sixty five year old who we are sure will inspire many readers!

The mitral valve prolapse I learned about at age 26 never gave me any problems. A doctor found it during a routine annual exam and instructed me to watch for any shortness of breath, but he also informed me that most people who 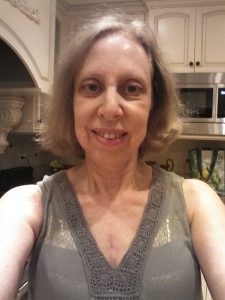 have the condition go through life without any issues. I thought I was in that group. Then in 2014 when I was 61, a little chord (chordae tendineae) on the mitral valve ruptured. Immediately I knew that something was wrong as my heart began racing and pounding, signaling that I’d gone into atrial fibrillation (afib). I was at the gym at the time, in the middle of the two-mile run on the treadmill I’d been doing most days for 20 years. I didn’t know much about the heart.

Since I didn’t pass out or feel tightness in the heart, I figured it wasn’t a heart attack and maybe I could just wait it out. Instead of going to the ER, I decided to skip the rest of the run and just do free weights and machines. Soon my heart returned to normal rhythm, which I learned is called “sinus” rhythm. I told myself I’d had a panic attack, even though I’d never had one and couldn’t come up with any reason I would have one. I stayed in denial for a week! Each day my heart would go into afibrilation for minutes or hours but always return to sinus rhythm. My activity level diminished from running two miles a day to getting winded from walking up a flight of stairs.

On Thanksgiving Day, when I could see my heart beating from outside my sweater, I came out of denial. The next day I saw my doctor, who sent me to the hospital, where I stayed for four days of tests that resulted in a diagnosis of severe regurgitation of the mitral valve from the ruptured chord. I had no sign of heart disease, no blockage in the arteries and no other valve issues. Still, I was going to need open-heart surgery (OHS) for a valve repair or, if that wasn’t feasible, a valve replacement. By this time I was so out of denial that I’d hit the other extreme, assuming I would either die or need a heart transplant. So I was pretty happy to hear that something could fix this. And there was no urgency; I’d be on meds until I could arrange the surgery.

Apparently the patient is the captain of the treatment, because when I expressed displeasure at hearing I’d be on “blood thinners” temporarily, the nurse told me, “You’re the patient. You don’t have to take anything you don’t want to.” Now, again, I knew absolutely nothing about all of this. She made it sound as if it didn’t matter whether I took the warfarin or not, so I chose not to and they put me on other meds instead. Two weeks later I was doing some simple stretches to try to at least stay flexible since I wasn’t working out at all, and suddenly I couldn’t get a deep breath. I knew this was not a good sign! At the hospital they told me I’d gone into heart failure, and it was during this four-day stay that someone noticed that I was at risk for having a stroke because I wasn’t taking warfarin (Coumadin). They put me on Lasix, which meant giving myself two shots a day in the stomach for several days until the warfarin kicked in. Then I would go to the Coumadin Clinic at the hospital a few times a week to have my levels checked. This made me want to get the surgery over with, because if the repair was successful I would not have to take blood thinners anymore.

Two weeks after that episode, I under went OHS for a successful, although more complicated than anticipated, valve repair and Maze procedure at Highland Park Hospital in Highland Park, Illinois, with surgeon Dr. Jonathan Somers. It was around New Year’s, and the hospital had a nice festive air about it, which was good because I was there for eight days. I was doing well, but my oxygen levels weren’t quite up to the level they wanted so that extended my day past the five- or six-day average.

For the most part, I recovered quickly. I was walking daily and sleeping in my own bed, propped up on my back, from the first night home. But I frequently ran a low-grade fever that knocked me out of commission entirely. I had zero energy and felt terrible, usually for a half-day to a day. That lasted three months. Other than that, I continued to improve, completing cardiac rehab with flying colors and having no trouble on a trip to Mexico, which has an elevation of more than 7,000 feet. Then about six months after surgery I had two weird occurrences. First, my left eye suddenly had wavy vision that lasted only about five minutes but did freak me out. Nine days later, my left leg became “heavy” in a way that I could walk, but the leg was almost dragging. That, too, lasted a short time, maybe ten minutes. I went to see my internist, the same doctor who’d sent me to the hospital when this all started. She thought that the two incidents might have been TIAs, precursors to strokes. She insisted that I go back in the hospital. So there I was, perfectly fine really, on stroke watch for another four days. Several times a day they’d check my eyes, watch me walk and ask me questions to monitor cognition. On the last day, the head stroke doctor told me that TIAs do not present like that. They last longer, for one thing. I left the hospital with no diagnosis. A few months later, I had a routine appointment with my ophthalmologist and told him the whole story. He felt pretty certain that I’d experienced two incidences of “atypical migraine” and cautioned me that it sounds less harmful than a TIA, but it does cut off the blood to whatever region is being affected, so if I have another one I should call my doctor, and if it lasts about an hour I should go to the Emergency Room. I’ve been lucky; nothing like that has happened since then.

All of the hospital stays were hard on me. About 12 years earlier, when I had a lumpectomy for breast cancer, I also 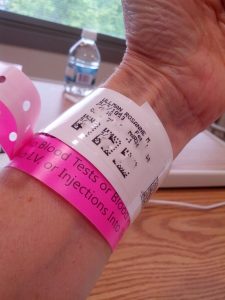 had some lymph nodes removed from my left side. That means that my left side should not have any needles or even blood pressure cuffs.

So all of my IVs and poking is on my right side. I had a black-and-blue right hand a lot during those first six months after surgery. But then it all stopped. It has now been more than three years since my surgery. I’m nearly 65 and again running two miles most days. I take only a daily low-dose aspirin and, except for my faint scar, I really wouldn’t be able to tell anything had happened.

Why did that chordae tendineae burst? Maybe there was a congenital weakness. Or it’s possible that the chemo and radiation I’d undergone for breast cancer 12 years earlier had damaged it. I also haven’t ruled out the stress from running – not my normal runs, but I also compete at Senior Olympics track meets and run faster than I think my body was built to move, although I’m slower than I was before surgery. (Yes, I’m competing again – with the ok from both my cardiologist and surgeon.) I’ll never know the reason this happened to me, but I know that a lot worse things happen to people every day, and I’m very grateful that modern medicine could return me to the quality of life I enjoyed before the day my valve sent me on a journey I had no idea I’d be taking.